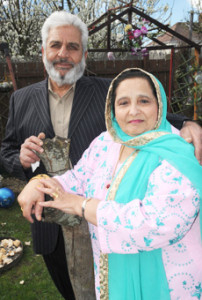 Sahara Kenya Project was founded after a trip to Mombasa, Kenya in 2009. A retired couple from Teesside were shocked at the appalling conditions homeless people lived in. This visit inspired them to launch a project to help homeless people better their lives in the African country.

What they saw had an emotional and lasting impact on them because both of them were born in Kenya and spent their childhood there growing up.

Emna and Shariff Din, who emigrated from Kenya to Teesside in 1974, visited an area near Mombasa in 2009. They found it upsetting how people, particularly older people, were forced to live in slum like conditions.

When they returned home to the UK they decided to build a shelter back in Kenya for the homeless and feed the poor. Later the couple purchased a plot of undeveloped land in Vikwatani, Mshomoroni in Mombasa (Kenya), with their own savings and started plans to build rooms to provide shelter.

Shariff, a retired engineer, says: “It was terrible. They only had shade for their head, a blanket and one basic meal a day. I‘ll never forget what I saw and experienced. I just think it is my duty to help them.”

Emna explains: “I remember a homeless elderly man asking me for 100 shillings which is about £1.00. That would feed his family for 1 day. I felt so bad. I felt like I’ve got everything and they’ve got nothing at all. I asked myself how I could ignore them. After all they are human beings who should not starve. I can still remember the look on their faces when we left to come home. I can‘t explain it. I felt something. It was like I had realised I must do something in my life before I die for those poor people.”

So with the help of their daughter-in-law Halima, they have set up ‘Sahara Kenya Project‘, with the aim of helping the homeless in Kenya.

Mum-of-three Halima says: “When I help to organise fundraising events I think about the fact that the money raised will help the needy in Kenya not just for one day, but forever.”

Sahara Kenya Project was entered on the Register of Charities (England & Wales) on 9th September 2011. The registered charity number is 1143739.